×
You are here: Home / Lifestyle / 60 Weird And Fun Facts About Animals 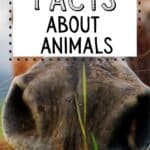 Learn all about Weird and Fun Facts about Animals: Dogs, Cats, Fish, Birds and other Animals.

Are you ready to have your mind blown? I found 60 of the most fascinating Animal Fun Facts for you.

Every animal has its own unique peculiarity and attributes that make it different and unique from other animals.

When the bird and the bird book disagree, believe the bird.

The smaller the bird, the closer will allow you to approach.

Bird Calls are adjectives with few verbs. They don't tell you what they will do -- only how well they will do it.

The single best clue to a bird's identity is the shape of its bill.

If a flock of geese is in a close V formation, is Canada geese. If it is a looser V, rippling and waving, or has a long line like one leg of a V, is more likely the less common snow geese.

The inside of a pigeon loft should be low enough so that a pigeon can't fly over your head and small enough so you can touch all four walls while standing in the middle.

Among birds of prey, females are about one-third larger than males.

If you don't want a cat to jump in your lap, don't make eye contact.

When a cat nudges your feet in the morning, wants to stay inside. Nudges your face, want to go out.

Feed your cat as much as the cat can eat in 30 minutes, twice a day.

There should be one more litter pan than the number of cats in your household.

Sharing litter pans is the leading cause of house soiling problems in cats. If you only have one cat, if it isn't using the litter pan, give it two litter pans and clean them.

If you give your dog a fancy name, it's not for your dog but for your pride. You'll end up using a nickname.

Owning two dogs is no more work than owning one, but three dogs are hard work.

Pay only half of the retail price for a used kennel.

Figure on 1 pound of dry dog food for every 30 pounds of dogs.

In a suburb of medium density, you can hear a dog's bark can in 200 surrounding houses -- or by 800 people.

A stray dog afraid of people will trust the people associated with the dogs it plays with.

The old rule, multiplying a dog's age by 7 to find the equivalent human age, is not true.

A dog can reproduce at 1 year and has reached full growth by 2 years.

To calculate a dog's age in human terms, count the first year at 15, the second year as 10, and each year after that as 5.

When a dog tolerates gentle handling between its toes, the dog is suited for children.

Two dogs headed for a fight appear matched, the dog on his home turf will win.

If you want to be friends with somebody else's dog, let the dog make the first move, and don't be too quick to respond.

A kennel should be two times the length of the dog. Measure the dog from its nose to the tip of its tail.

The best time for taking a puppy from its litter is when he or she is at 49 days old.

The first musher to reach the town of Iditarod. The halfway point, in the sled race, will not win the race.

In a new aquarium, feed the fish half as much food as you want to and change the water twice as often.

You need three watts worth of aquarium heater per gallon in a room of normal temperature. Use four watts per gallon for rooms that are cooler than normal.

Provide at least one gallon of water for each inch of fish.

The distance between an alligator's eyes, in inches, is proportional to the length of the alligator, in feet.

Difference between male and female blue crabs is the design on their apron (belly.)

The male blue crab has the Washington Monument, while the female apron is shaped like the U.S. Capitol. Also described as -- A girl has a beehive and a boy has a lighthouse. Does that mean the U.S. Capitol looks like a beehive?

It takes a lobster seven years to grow to be one pound.

Fun Facts About Other Animals

A 1,200-pound horse eats about seven times its own weight each year.

To find an elephant, look within 300 meters of water.

The year after a season of a heavy acorn production, there will be one more chipmunk living on each quarter-acre plot.

The circumference of an elephant's front foot is equal to the height of the shoulder from the ground.

A female swine, or a sow, will always have an even number of teats or nipples, twelve.

Zigzag to outrun a crocodile.

If a polar bear charges you, dodge to the right. Eskimos say most polar bears are left-pawed.

When stuffed tarantulas are displayed in a glass case, two out of four people will find them interesting. One person will refuse to look and one will want to inspect them. All will cool at the top is removed.

To breed buffaloes, you need at least 1 bull buffalo for every 15 cows.

To estimate the weight of a gray whale, figure one ton per foot.

Keep baby animals in something that is 90 to 95 degrees Fahrenheit until their eyes are open, then lower the temperature 5 degrees a week to room temperature.

A grown rat can pass through a hole the size of a quarter.

A snake needs a cage whose perimeter is equal to or greater than its body length.

60 Weird And Fun Facts About Animals