×
You are here: Home / Pet Safety / How to Keep Your Dog Safe From Coyotes 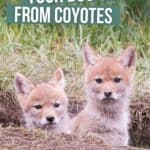 Coyotes are on the rise in the US, and they’re encroaching into suburbs, neighborhoods, and even towns.

The scariest part of these animals is that they’re becoming more aggressive and fearless than they ever have been in the past.

They’ll hunt and eat any (or no) animal they come across... and even your pets. They’re so bold and brazen that they’ll even snatch a child from out of a car—all to create a meal.

We can find coyotes in every state in the United States, except Hawaii. They no longer simply roam in the fields, woods, or deep forests. The chance of meeting up with one on a walk, hike, in a park or your own backyard is quite high.

Coyotes are often mistaken for dogs, especially German Shepards. This is because coyotes are actually a member of the dog family. Which is why coyotes can often be attracted to our dogs.

And dogs can become attracted to coyotes. Sometimes coyotes and dogs even mate!

Difference Between Coyotes and Dogs?

Coyotes can have a “sleeker” look than say a German Shepard, a domesticated dog.

Coyotes appear to have longer legs than domesticated dogs, while dogs have deeper chests. They can reach up to 24 inches tall and typically weigh between 20-50 pounds.

Coyotes are omnivores and prefer to eat small animals such as rats, racoons, rabbits, or squirrels. If they can’t find any small prey, they will settle for fruits, seeds, and plants.

Because they are skillful hunters, that are masters at quickly snatching their prey, it’s important that we keep your dog safe from coyotes. They’ve been known to snatch a dog right from a walk, with its leash still attached.

While coyotes aren’t afraid of dogs, they will back off and stay away from humans.

During a walk, it’s always best to keep your dog close to you!

How Long Do Coyotes Live?

It widely believed coyotes to be the only animals that can smell their prey from up to a half-mile away. But according to a study by the US Geological Survey, they aren’t the only ones. Coyotes like to hunt alone, in pairs or more often in a family pack.

When a coyote is looking to take down a larger prey, they will usually have a family pack standing by in the nearby woods.

More often they like to hunt at night, but there have been reports of coyotes snatching dogs in broad daylight.

Researchers found that bats and dogs can do the same. The USGS examined about 500 animals in the wild, including coyotes, bats, and dogs, and found that they can smell their prey from a distance of between about 1,000 and 3,000 feet.

Bats have a much better sense of smell than dogs or coyotes, with the ability to detect their prey from further away than the dogs and coyotes.

Coyotes are part of the Canis family, which include wolves, foxes, jackals, and dogs.

Coyotes are prolific breeders, with an annual pup crop of around four litters (the offspring of a female), which is common for a canid.

What people may not realize is that coyotes will seek and hunt almost any animal, including small pets, livestock, and even small humans.

Coyotes are territorial creatures that have a unique way of communicating with each other.

The distinctive yips, yips, yips, yips are most commonly heard in late January and February, when the pups are weaning from mom and the adults are looking for a mate.

Males yip to establish their territory; in some areas, the yips are territorial and territorial, while others are social.

Coyotes also yip when they are fighting over food, as well as during courtship and when there is some sort of threat.

How to Protect Your Dog from Coyotes in the backyard.

Watch your dog - watch your dog at all times even when outside, but most especially when your dog is outside at night or in the early morning hours when coyotes are out hunting.

Fences and Coyotes - Yes, a coyote can get to your dog even if your yard is fenced! Coyotes can get over a fence as high as 7 feet tall. If they can’t climb a fence, they have dug their way underneath. Considering the average fence is between four and six feet high, it’s not much of a challenge for a coyote.

Keep the Lights on - Coyotes don’t like bright lights. Before you let your dog out to go potty or play, be sure to turn on the outdoor lights. By making it as bright as possible you’ll be able to keep an eye on your dog and coyotes avoid bright lights.

Pick Up Your Dog’s Poop - Coyotes have excellent scent sniffing abilities. They can become attracted to your dog’s poop. Don’t unintentionally set out a welcome mat for local coyotes. When your dog poops, give it a quick scoop and toss it.

Keep Your Trees and Shrubs Groomed  - by avoiding thicker foliage you’ll eliminate as many hiding spots as possible. By eliminating high shrubs or trees, a coyote won’t have a hiding spot in order to stalk their prey or have a spot to make a den.

Decks, Porches, and Sheds - Don’t leave any decks, porches or your sheds open. An open structure is a sure-fire spot for a coyote to hunt or setup it’s den.

Avoid Feeding Coyotes - We want coyotes to continue having a natural distrust of humans. Feeding a coyote, or any wild animal, will make him less fearful of you, which can give them the courage to come closer.

While throwing out a few bites of food may seem harmless, you could be unintentionally encouraging the return of a coyote or pack of coyotes, making it dangerous for your dog. This includes leaving any food or even water outside.

How to Safely Walk Your Dog

Use extra caution when walking your dog at dusk or dawn. The most active times for coyotes to be in search of food are during dusk or dawn.

Even though coyotes are typically night hunters, it’s not uncommon to see them during the daylight hours, especially in winter.

Keep Your Dog On A Leash - Use a shorter leash, no longer than 6 feet, is the safest and easiest way to walk your dog and maintain control. In addition, shorter leashes help to keep your dog closer to your side.

What To Do If A Coyote Attacks Your Dog?

If you run into a coyote in your backyard, on a walk, or any other place, experts say the best way to get them to move on is by doing these things:

Stay calm, make yourself as big as possible, and yell. Coyotes usually will not attack if you’re a serious threat. Back away slowly and pick up your dog if you’re able to. If you have a flashlight, you can to scare the coyote away.

If you can’t pick up your dog, here are a few tips:

No, coyotes do not ambush into a pack. While coyotes are smart, and they typically do attack pets, but they probably won’t try to lure your dog to its death.

Do Coyotes attack Dogs During the Day?

Coyotes hunt through all the season. Just like us, they need food every day of every month of every year! Coyotes also never hibernate.

Do Coyotes Stalk Dogs or Humans?

Coyotes can shift their hunting skills, which depends on the prey they are hunting. Their techniques can include stalking and pouncing or running.

Are Dogs Afraid of Coyotes?

While a coyote is also part of the dog family, dogs and coyotes are not good friends. ... Yes, a dog can sense or smell a coyote and react accordingly.

If you notice a dog howling, whimpering and sniffing around like crazy, it can be a telltale sign your dog senses a coyote.

Can a Coyote Kill a Dog?

Yes, unfortunately when a coyote attacks a dog it can be fatal, which is why it's vital to keep your dog safe from coyotes. They are stalking their prey with the intention of a direct kill.

Will a Coyote Attack a Large Dog?

Coyotes rarely attack large dogs, but they will fight with a dog if provoked, and both the dog and coyote can be injured or killed.

How to Keep Coyotes Away?

The most common way to keep your dog safe from coyotes away is to use wolf urine, moth balls or rags soaked in ammonia. You can position these around your yard to keep coyotes from entering.

If you have to store your garbage cans outside, you can even use these deterrents in your outside trash cans, which helps to deliver a strong smell that masks the odor of food.

If your pet gets bit by a coyote, it will require immediate veterinary attention. If nothing else, your veterinarian will need to clean the wounds, get some antibiotics, and give your dog a booster for the rabies vaccine. While it’s rare, coyotes can carry rabies.

Any coyote attacks should be reported to your state’s wildlife agency as soon as possible.

Stay aware that April is when the coyotes are going to have their pups. Therefore, April through August is when they are going to be more protective of their young. Stay extra careful during this time. Walk a dog on leash and stay aware of your surrounding, by watching for coyotes in the area.

While coyotes pose a threat to dogs, it’s important for people to recognize the fact that these animals are native to North America and a very crucial part of the wildlife habitat.

By taking a few precautions, there is no reason the two species can’t live together peacefully and you can easily keep your dog safe from coyotes.

How to Keep Your Dog Safe From Coyotes

Keep Your Dog Safe From Coyotes