×
You are here: Home / Lifestyle / 17 Amazing Facts about Goldendoodle's 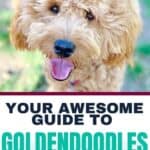 Are you thinking of getting one of the cute teddy-bear goldendoodle puppies? Here are the top 17 Amazing Facts about Goldendoodle's and their answers.

Goldendoodles! Chances are you've probably seen one around.

They've become popular and seem to be everywhere right now. They are some of the smartest dogs in the world.

A perfect mix between a Golden Retriever and a poodle. They have become the ideal family dog.

I've heard them called "people in fur coats," they are charismatic and loving.

A hybrid breed that combines the best characteristics of its purebred parents, they are wildly popular.

Goldendoodles require a moderate amount of activity and are happily your favorite companion.

What are the Best Things about a Goldendoodle?

Everything! The grooming is about the only downfall of getting a Goldendoodle.

Besides being smart, loyal, loving and a popular choice for people with allergies.

Here's why Goldendoodles are one of the top 5 dogs.

What size Do Goldendoodles come in?

There are three types of Doodles. Depending on the genetics of the parents, you can find them in one of these ranges.

As in most breeds, females are usually smaller than males.

As for temperaments, the Mini and Toy Goldendoodles are more energetic than Standards.

A cross between a Toy Poodle and a Mini Goldendoodle.

Mini Goldendoodles are a cross between a Miniature Poodle and a Golden Retriever.

The largest Goldendoodles, they are also a cross between a Standard Poodle and a Golden Retriever.

An F1 is considered the first generation. A puppy is 50% Golden Retriever and 50% Poodle. The F1 puppies are the healthiest.

I have known some breeders known to breed a Goldendoodle with a Golden, which creates more of the golden look. These puppies have a greater likelihood of shedding.

An F2 Goldendoodle is a generational cross with an F1 Goldendoodle with another F1 Goldendoodle. A breeder can cross these lines for seven years, at which time they can apply to register as a purebred. Sometimes these puppies lose their softness that we love with the doodles.

What is the most popular Goldendoodle color?

The apricot Goldendoodle is by far the most popular color, with cream and red in second and third place.

Poodles have a variety of colors with brown or chocolate, black, silver, and gray. There can be a mixture of patterns and colors.

Do Goldendoodle's get Lighter or Darker?

Most Goldendoodles have a darker coat and lighten up as they get older. Ruby was dark red when I first brought her home.

Over the next 9 months, she lightened up considerably. The only thing that stayed the darker red were her ears. She's more a cross between a red and a darker apricot.

Here's the way some of them can lighten or darken:

While most Goldendoodles are born with the cute black noses, they can turn to pink, brown, or liver colored.

Why Do Dog's Noses Change Color?

The Weather - In the winter months Ruby's nose changes to a lighter brownish color. This is called winter nose or snow nose.

This is usually a temporary condition caused by the colder weather. Once summer hits, it will go back to a darker color for a short time. At least until it's winter again.

Old Age - The pigment on a dog's nose ages just like our hair color. It may turn pink or even a light liver color. This comes from aging.

Bacterial Infections - If your dog's nose looks sore, crusty or unhealthy, most like they've developed a bacterial infection. It can cause this from drinking unhealthy water.

Dudley Nose - This is a general nose de-pigmentation. You'll notice your dog's nose will turn pink or sometimes white for no known reason.

Allergies - Dogs have allergies like we do. Because a dog's nose is usually, the first thing it comes in contact with, if your dog has allergies the first sign may be the color his or her nose changing.

You often notice this in puppies using plastic water bowls.

Usually you'll notice the lips on your pups will change and lighten.

What is a Teddybear Goldendoodle?

Teddy-bear Goldendoodles look just like teddy bears! Sometimes they are even hard to tell apart!

A teddy-bear goldendoodle is a cross between a Poodle and an English Creme Golden Retriever. They tend to have that boxier look.

Do Goldendoodle's get Curlier with Age?

Yes! Goldendoodle puppy coats change just like any other dog.

They lose their soft puppy hair about 5 - 6 months of age. My dog Ruby went from straighter soft hair to having the tighter poodle curls around her neck and behind her ears and legs.

There's no way to judge what your puppy is going to get until it loses its puppy hair. The only way to get an idea is to meet both the parents.

How Long do Goldendoodle's Live for?

The average lifespan of a Goldendoodle is 10 to 15 years.

Most Goldendoodle's love swimming as much as people do. However, monitor them as much as you would a toddler.

Even the strongest swimmers can get into trouble. We had flown to Phoenix, Arizona the first time Ruby went swimming.

She did not want to get into the pool the first time. Once we put her into the pool, she was a paddling all over the place. However, on her 3rd lap around a smaller pool her back legs grew tired, and she started to drown.

Because we were all in the pool, we could reach her right away. After that we bought her a cute little life jacket. By the time we left Arizona, she was a paddling pro with the life jacket on. Whenever we go to a lake or pool, we make sure she has her life jacket.

Can a Goldendoodle be Left Alone?

Goldendoodles are people dogs. While they love to be around you, they can be left alone over time with some preparation.

For example, a new puppy shouldn't be left alone for more than an hour or two in the beginning.

Your puppy will well if you leave them alone with short periods of time. They may be apprehensive at first, but it gets better with time.

I highly recommend a snuggle puppy with any new puppies. A snuggle puppy is a stuffed animal with a little heartbeat inside. It mimics the mother's heartbeat and helps to settle a new puppy when they first come home.

Are Girl or Boy Goldendoodles better?

Some people believe a male dog is much more affectionate than a female dog. I found no studies to prove this theory. My dog Ruby and most of my other female dogs have been affectionate and loving.

Personally, I feel that no matter if it's male or female, a lot of it depends on their start in life.

You bet they are! Because of their breeding, they are intelligent with an uncanny ability to communicate with their people.

Because they are a cross between a Poodle and a Golden Retriever, they are smart and can easily learn commands quickly and easily.

How Long Do Goldendoodle's Sleep During the Day?

Goldendoodles do not differ from most dogs. They sleep almost 75% of the day away.

Large breed dogs can sleep up to 18 hours a day.

Once they get passed the puppy stage, normal sleeping times for Goldendoodles are 12-15 hours a day.

Yes, they love to run! Ruby can run for about an hour on end, but then she's done and will nap for a good hour afterwards.

Goldendoodles are great for medium distance runners as long as we properly train them.

To train your Goldendoodle, you'll want to begin by teaching your dog to run in gradual distances. To help build up or cool down, you'll want to start and end with a walk.

A warm up and cool-down period is just as important in a Goldendoodle as it is for humans. Always make sure your dog has plenty of water afterwards.

At what Age Do Goldendoodle's Calm Down?

The life transition from puppyhood to adulthood begins between 8 - 14 months old in Goldendoodles.

At about 12-14 months, a slow transition begins and your dog will calm down.

However, don't expect them to not get excited when someone new comes to the door until he or she is over 10 years of age. My dog Ruby is just now mellowing out. She's now 16 months old.

A lot of a Goldendoodle or Labradoodle calming down depends on how much exercise they are getting during the day.

I let my dogs out to run and play several times a day. By doing this, I'm assured of a peaceful evening.

If I have to work during the day and they don't get their exercise, then fully expect the evening hours to be full of playtime.

Even playing fetch outside for 20-30 minutes is enough for dogs to feel less anxious and settle down afterwards.