×
You are here: Home / Lifestyle / 8 Reasons Why Dog's Chase Their Tails? 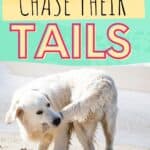 Why do dog's chase their tails when excited?

Even though you can't help but laugh when your dog spins circles in a dizzying attempt to catch his own tail, you might be surprised to learn what causes this seemingly silly behavior.

In the event the dog eventually catches the target, he or she may suffer injury from his or her triumphant chewing, so it is a habit best avoided.

Here are the top reasons your dog might chase its tail and what you can do to stop it.

Boredom. The act of spinning releases pent up energy, which is why active dogs who don't get enough mental and physical stimulation may chase their tails to relieve boredom.

Your dog will enjoy exercising both their body and mind by learning new tricks and playing with puzzle toys.

Attention seeking. Dogs are aware of the smile their antics bring to your face, and they enjoy having everyone's attention.

So they chase their tails to get your attention. Despite your dog's spin, you need to ignore it.

You should give them praise and cuddles when they are relaxed instead to encourage calm behavior.

Hurt tail. In the same way you rub your shin when you bump it, dogs may chew on their tails when they are in pain.

Dogs with powerful wags are especially susceptible to tail injuries.

A veterinarian should be consulted if your dog suddenly starts chasing his tail when they have never done so before.

Compulsive behavior. There are dogs that chase their tails obsessively, gnawing them to the point of permanent injury.

While the underlying trigger can vary, such as separation anxiety, noise phobia or excitement, once the spinning starts, it's hard to stop.

If you want to break this habit, work with your veterinarian to identify the underlying cause, as well as treat the chewed tail using medication.

Puppy exploration. I actually think this reason is hilarious-and adorable too! Upon becoming aware of their body, puppies may wonder what this fluffy thing is following them around and tug on it.

Try not to reward this behavior to prevent it from developing into one of the above problems.

You probably won't be able to stop the "awws" and giggles this elicits.

A Medical Condition - There is nothing wrong with your dog chasing his tail from time to time. However, this behavior could signal a more serious issue if it persists.

Many experts believe tail chasing in dogs may even indicate mental illness. The Guardian reports that canine compulsive disorder is characterized by obsessive tail chasing.

When left unchecked, this behavior can lead to dogs damaging their tails. If you believe your dog is obsessively chasing their tail, consult your vet.

Genetics - There may be a connection between compulsive tail chasing and high blood and cholesterol levels, according to research published in the Journal of Small Animal Practice.

According to their findings, the 15 tail-chasing dogs had significantly higher cholesterol levels overall and in both low- and high-density lipoproteins than controls.

Several things can cause your dog to chase its tail, so don't ignore them. You may want to keep an eye on this behavior if you're getting plenty of exercise and play time outside together, but you still notice this behavior.

You may want to take your dog to the vet if you notice them chasing their tail obsessively and nonstop.

Parasites - In order to relieve the discomfort caused by parasites such as fleas or ticks, dogs may chew on their tails in an attempt to scratch the itchy spot.

While dogs are more likely to sit down and contort their body to reach an itchy spot, they may first try chasing their tails.

When your dog chews on its tail, you should check for any signs of parasites and contact your vet about having it examined by a professional.

Do Certain Breeds Chase Their Tails More Than Others?

Several breeds of dogs are more likely to chase their tails than others, according to an article published on the National Center for Biotechnology Information.

There is also evidence that it is common in terrier breeds, such as the West Highland white terrier and Jack Russell terriers, but there is not enough statistical evidence to confirm it.

Is It Normal For A Dog To Chase Their Tail?

Dogs may be simply having fun when they chase their tails. They're discovering what their bodies are capable of.

How Do You Stop A Dog From Chasing It's Tail?

Try to distract your dog.

As soon as you see your dog start to chase his tail, distract him with a toy, food or attention to get him to stop.

When your dog isn't in the stressed state of tail chasing, teach him commands, such as sit or lie down.

You also can teach a trick, such as shake.

It's important to monitor your dog's behavior when they chase their tail. It may seem harmless and can be great entertainment for you and your dog.

In younger dogs that are less "tail-aware," they are at risk of catching their tail.

A dog's tail has many small bones that can be damaged or broken if injured. If your dog perceives itself as prey, it may be inclined to chomp at it, which could result in a tail bite.

You may want to discourage this behavior if you notice that they are close to catching their tail.

8 Reasons Why Dog's Chase Their Tails?