×
You are here: Home / Healthy Dogs / Can Dogs Smell Cancer in Humans 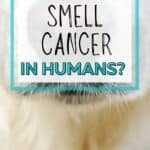 We all love dogs for many reasons. Dogs are loyal, comfortable, caring, and dependable.

During stressful times, therapy dogs offer patients and their families a welcome distraction and comfort.

Dogs can sense some medical conditions in humans, such as diabetes distress and oncoming seizures, because of their amazing sense of smell and their trainability.

A growing body of evidence now suggests that dogs may also help humans detect cancer, either directly or indirectly.

The Science Behind a Dogs Smell Cancer

Alexandra Horowitz, a research scientist, writes in her book "Nose of a Dog" that “most of what the dog sees and knows comes through his nose.”

How Do Dogs Act When Dogs Smell Cancer?

There has been formal study and confirmation that dogs can detect melanoma, a potentially deadly cancer.

Researchers found that dogs persistently sniffed, licked, and nipped at melanoma lesions on their owners’ skin, even through clothing, which led owners to identify the cancerous sites and seek care from clinicians.

As described by Horowitz in "Being a Dog," a Dachshund puppy repeatedly sniffed its owner’s armpit. Eventually the woman found a lump there, which led to a diagnosis of breast cancer.

Can Dogs Be Trained to Detect Cancer?

Researchers at the University of Pennsylvania Veterinary School’s Working Dog Center and Medical Detection Dogs, in the United Kingdom, are investigating this possibility.

In these studies, the dogs sniffed the breath of patients diagnosed with breast cancer and lung cancer.

The dogs supposedly detected biochemical differences in the exhalations of cancer patients and those who did not have cancer.

In various experiments, dogs have detected:

Will Doctors Use Dogs to Help Detect Cancer?

An Israel Institute of Technology clinical trial is testing two of its NA-NOSE electronic noses to determine their ability to detect malignant tumors and specific smells in patients’ breath.

MIT’s Center for Bits and Atoms is working with Medical Detection Dogs to develop ways to use dogs to teach artificial intelligence to detect prostate cancer.

Researchers in physics, chemistry and gynecology at the University of Pennsylvania Veterinary School have developed electronic devices that detect and identify tiny amounts of odorants released by ovarian cancer tumors, which were detected by trained dogs.

Dogs And Their Two Noses

A dog’s powerful nose has 300 million sensors compared with the human’s measly 5 million.

In addition, dogs have another smelling organ in the back of their noses that we lack, called Jacobson’s organ.

How Do Dogs Smell Cancer in Humans?

Cancerous cells produce a very distinct smell. Even human noses can detect it in late stages of the disease.

The dogs’ sense of smell is between 10,000 and 100,000 times more sensitive than ours, which means they can detect this smell much earlier in the disease’s progress, even when the cancer is still “in situ,” or hasn’t spread.

Dogs can detect this scent on a waste matter like breath, so they don’t need to smell the growth directly.

That makes the work of training a dog to detect cancer a lot simpler.

Can My Own Dogs Smell Cancer in Humans?

A few studies suggest that untrained dogs can detect cancer, but others disagree.

Co-founder of Medical Detection Dogs, Dr. Claire Guest, discovered she had breast cancer after her dog, Daisy, began nudging an area of her chest that felt bruised.

Someone later diagnosed her with two tumours.

Several pet owners have reported that their pets’ behavior changed prior to being diagnosed with cancer.

Other Posts You May Enjoy

Can Dogs Detect Cancer in Humans?