×
You are here: Home / Pet Safety / How To Keep Your Dog Safe From Eagles 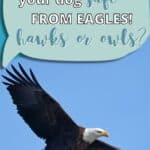 Keep your dog safe from Eagles, Hawks and Other Birds of Prey

Eagles, hawks, owls and other birds of prey don’t know the difference between your dog and, say, a rabbit or rat.

To them, they are all on the menu. They will swoop down to grab their next meal.

If you have an eagle eye for spotting these predators in flight, then it’s important that you protect your pet against attacks by eagles, hawks, falcons, ospreys, kites, buzzards, vultures and others.

Despite nearly having been wiped out by hunters who killed off most of its population for sport or food, bald eagles are now back in the United States. Bald Eagles Are Back. And They Want to Eat Your Pets.

How Big is an Eagle?

Eagles are a magnificent bird. A golden eagle is a massive bird with wingspan exceeding 7 feet.

A golden eagle’s plumage is fairly uniform, whereas the color of a red-tailed hawk varies from one individual to the next. They are mostly covered in brown feathers, with a few golden tufts around their necks.

Besides hunting various kinds of prey, golden eagles prefer to eat rabbits and other small mammals. Occasionally, they will eat a small dog or cat.

There are cases in which a golden eagle has attacked a small deer, dog or cats.

Bald and golden eagles are substantially larger, but they rarely exceed 15 pounds.

How Much Weight Can an Eagle Carry?

Eagles are the largest birds of prey in North America. They can weigh up to 50 pounds and have a wingspan that is about 3 feet wide!

The eagle’s talons, which they use for hunting, can be as long as 6 inches.

Their eyesight is very sharp, so it makes sense why eagles hunt by sight rather than smell or hearing.

An adult bald eagle has been known to eat fish weighing over 100 lbs., but most often will feed on smaller animals.

Neither hawks nor owls can carry off more than their own body weight.

Keep your Dog Safe from Eagles?

Pets at Risk From Eagles: The pets most at risk from hungry birds of prey are small animals that spend time outdoors unsupervised.

An Eagle or large bird of prey may carry off a 2-pound Yorkie puppy, but it’s unlikely that a 70-pound Labrador Retriever would be light enough for most birds to lift.

But that doesn’t mean an Eagle, hawk or owl wouldn’t try to feast on a larger dog, so it still makes good sense to protect dogs this size.

The best way to keep your dog safe is to make sure he doesn’t go outside alone. This means keeping him indoors when possible.

It also means making sure there aren’t any places where he could be attacked while out walking with you. You can do this by:

If you live near areas where eagles nest, you might get some sort of bird deterrent system installed. These systems work by emitting sounds which scare off eagles and other predatory birds.

The sound waves produced by such devices are very loud, much louder than those emitted by lawn mowers or car alarms.

Why Do Eagles Attack Dogs?

So why would a predator attack a pet at all? Well, there are several reasons. First, because its easy food. Birds of prey will often take advantage of opportunities presented by human activity.

For example, they’ll snatch up roadkill or scavenge food left out on picnic tables or attack small dogs. They might also target unattended livestock or poultry.

In extreme cases of highly aggressive birds, pet owners can contact local wildlife management officials for an evaluation of whether the bird can be deterred or moved if necessary.

What Happens When a Eagle Attacks Your Pet?

Eagles, red-tailed hawks, and or other birds of prey do not pick fights with dogs out of nowhere.

Unlike other prey animals, dogs tend to fight back, which can cause injury or death to the bird. Eagles, Hawks or Owls pick and choose their battles.

This means that Eagles, Hawks and Owls usually start attacks for one reason: their hunger.

Birds of prey such as eagles, hawks or falcons may also attack if they feel threatened by your dog or see it as a competitor.

Fiercely protective of their nests, these formidable birds are also known to attack larger animals, even humans, occasionally. An eagle or hawk will do this when it is guarding its nest and young. An eagle may chase away dogs within 150 feet of their nest.

Fortunately, most of these defensive attacks do not include serious physical contact.

How to Keep Your Dog Safe from Eagles, Hawks or Owls

Eagles, hawks, and owls are formidable predators who are quite skilled at their craft.

Over time, they have developed the ability to deal with a variety of prey species, some have even been recorded attacking porcupines and other armored prey. Therefore, they pose a serious threat to small dogs.

To prevent pests from hanging around your property and home, be sure to discourage them from doing so first. Here are a few ways to do so:

Birds of prey can eat yard debris to hunt mice, rats, frogs, and snakes, which may serve as hiding places.

Maintain your yard as neatly and cleanly as you can. It’s also a great rule for coyote-proofing your yard, since they are similarly attracted to these critters and may enter your yard if rodents are nearby.

If your yard has plenty of food for birds of prey, they’ll keep coming back.

If tidying your yard doesn’t succeed in reducing your local rodent population, you may need to take further steps.

It’s impossible to eradicate mice completely, but you can often keep their numbers under control. Ensure you (or the pest-control company you hire) use pet-safe traps that won’t harm your pet.

Our best advice for keeping your dog safe is to remove food sources that attract prey animals to your yard: Take down bird feeders (at least temporarily) and never leave birdseed on the ground.

Pruning your trees, removing bird feeders, and keeping your lawn clean are all ways to keep your dog safe.

Besides nesting in trees, eagles and hawks also use them as hunting outposts. Often, they will sit on conveniently located branches for long periods of time, scanning the ground below for catchable critters.

If your trees make good perches, you should hire a tree service to prune them and remove those branches. It is best to do this when the birds are not nesting.

How to Scare Eagles, Hawks, Owls or Birds Away from your Yard

As long as you take the proper steps to keep your pets safe, you can make sure they enjoy summer as much as you do.

If you want to keep birds of prey away from your yard, make sure you take steps to keep them away from it. Try:

Tape - Metal tape that reflects light is commonly frightening to birds. Tape long strips of tape to trees and awnings. Bird-deterrent tapes are available in plenty.

Spikes - Bird spikes make perching difficult for birds. Birds will move to another perch if they can’t find an easy place to perch.

Scare-crow owls - Birds of prey are also kept at bay by these scare-crow birds, since they keep rodents and small birds away.

Many pet owners are equipping their dogs with spiked body armor to protect them from hungry bald eagles The predatory birds have taken to hunting geese and chickens all across North America, making pet owners anxious about their pets.

Some have taken to outfitting their dogs in spiked body armor to try and protect their furry friends from being snatched.

Or you can use a Raptor Shield Puncture Proof Vest to prevent Eagles, Hawks, Owls or even Coyotes to grab your dogs. These suits are made with the same material as bulletproof glass.

The best way to protect your dog in your backyard is to use a bird deterrent system.

These devices emit sounds which confuse the predator into thinking there is another animal nearby.

Federal Laws that Protect Bald and Golden Eagles Bald Eagles are no longer an endangered species, but bald and golden eagles are still protected by multiple federal laws, such as the Eagle Act Migratory Bird Treaty Act Lacey Act , and other state and municipal protections.

The take of all migratory birds, including bald eagles, is governed by the Migratory Birds Treaty Act’s regulations.

The Migratory Bird Treaty Act (MBTA) prohibits the taking, killing, possession, transportation, and importation of migratory birds, their eggs, parts, and nests except as allowed under a valid permit (50 CFR 21.11).

The Migratory Bird Treaty Act (MBTA) prohibits the taking, killing, possession, transportation, and importation of migratory birds, their eggs, parts, and nests except as allowed under a valid permit (50 CFR 21.11).

The MBTA allows and directs the Secretary of the Interior to determine if, and by what means, the take of migratory birds should be allowed and to adopt suitable regulations permitting and governing take (for example, hunting seasons for ducks and geese).

How To Keep Your Dog Safe From Eagles